Machine learning as a smog-fighting tool

Machine learning as a smog-fighting tool

Poor air quality, especially within metropolitan areas, has become a serious problem in Poland. Stoves fired by solid fuels are pointed as a main culprit of such situation. Our team committed to searching for an unconventional solutions in the area of spatial analysis has explored the way in which battling the smog could be boosted by the machine learning technology. As a part of the R&D works, we had tested algorithms allowing for identification of an objects equipped with solid fuel stoves, which during the heating season could be a source of up to staggering 90% of the total PM10 dust concentration.

In order to launch the solution, the open-source remote sensing imagery, as well as in-house developed machine learning algorithms had been used.

In the following article you will find out:

Creating the database of buildings heated by solid fuel stoves is possible due to conducting analysis of the soot located on the rooftops of the buildings. However, in order to use the data for the analytical purposes it has to meet the certain criteria. The key is to use remote sensing imagery, acquired during the heating season. Moreover, the imagery has to be recorded in high resolution. For the purpose of the following analysis, the 5cm GSD imagery has been adopted and was believed to provide the optimal results.

The image presented below shows some examples of buildings for the following classes: 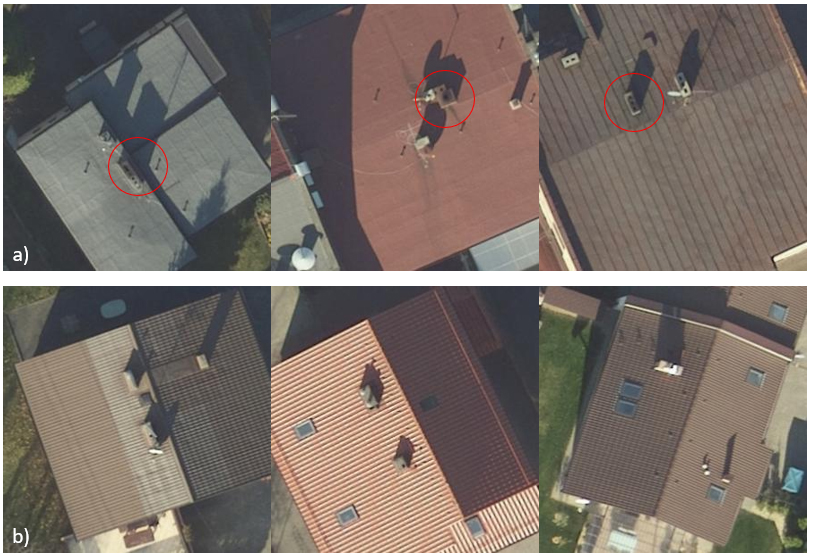 Certainly, there are examples of chimneys, for which identifying the method of heating is infeasible. Therefore, in order to conduct the research of classification and soot detection we have analysed the data downloaded from Jastrzębie Zdrój Geoportal. Spatial data, that had been exploited consists of not only the orthophotomap, but also precise information concerning the low emission source. 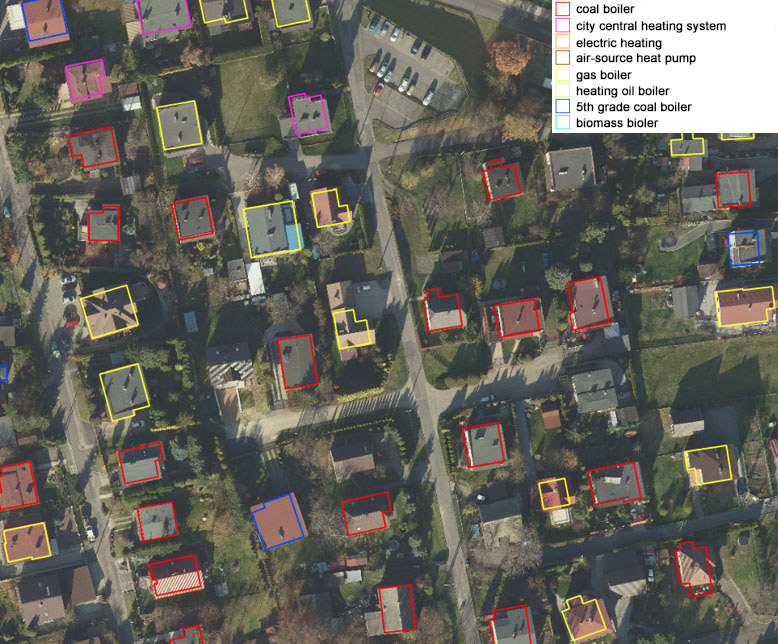 The aforementioned data has been used to create a training dataset for the buildings assigned to the following classes:

Based on properly prepared data creating the machine learning model is feasible. Keras, the Python library allowing for creating neural networks, has been used in the described example. At first data had been a subject of preliminary processing consisting of resizing into squares of 299x299 pixels, normalising pixels values, as well as dividing into training, validating and testing groups with the following proportions: 0,8 : 0,1 : 0,1. At that point data was limited and unbalanced: 3277 out of 4346 existing cases had been assigned to the solid fuel stoves class.

Further stages of the evaluation are presented below. In the introduction, the cross-entropy function has been applied, as well as Adadelta optimiser. The achieved results for each stage had been presented on the charts located in the further part of the article.

There are many indicators, that show effectiveness of the model in quantitative way. Precision and accuracy are two of the most commonly used indices. Precision is a measure that determines the percentage of correctly classified  cases within a given class. Whereas recall takes into account all the samples actually occurring in a given class and defines percentage of correctly predicted samples. The difference between those indicators is subtle, but significant. They only provide information on the areas for which the model is either more or less effective. 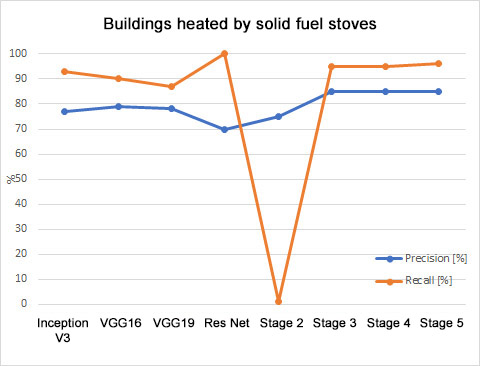 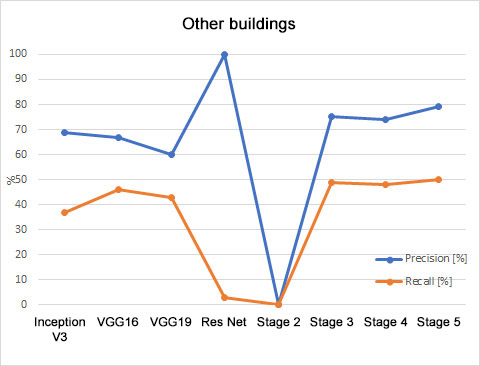 In order to determine which model is the best classifier the general accuracy is the value to be measured. In the described case it has reached almost 85%. However, it is not the most adequate indicator in case of the unbalanced dataset. Therefore, the F1 index seems to be the best suited indicator for the needs of comparing models consisted of the equally numerous test dataset. The F1 index includes both the information about precision and recall. Therefore, on the presented charts show the slight increase of the effectiveness within the both classes after every applied modifications can be observed. 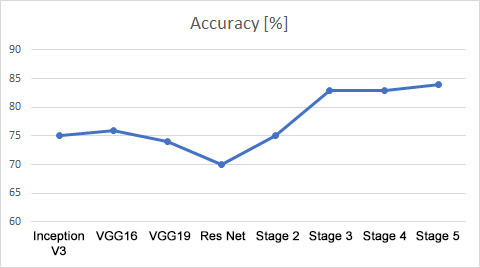 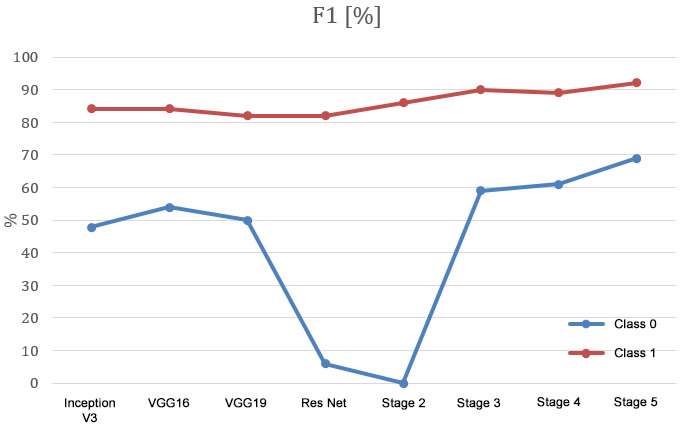 Aforementioned tests had a R&D nature and their goal was to analyse the possibilities of creating algorithm for detection buildings heated by solid fuel stoves.

R&D works had been executed by the winner of the internship competition “Space Sector Personnel Development” organised by Industrial Development Agency and Polish Space Industry Association.